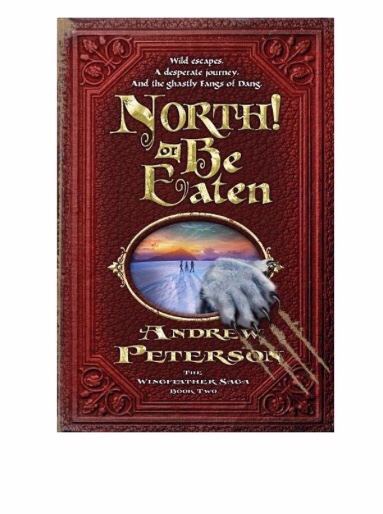 “At last, said the dragon, comes one who can ease our sorrow with song.”

After learning about who they really are, the Igiby children are on the run from the Fangs of Dang to save themselves and their family. The second book in the series, The Wingfeather Saga, starts off with The Igiby family once again hiding away. Podo, Nia, Janner, Tink (now we learn his real name is Kalmar), and Leeli and their newfound friend Artham are all running from the Fangs of Dang while living in the Glipwood Forest. From then on, their goal is to reach the Ice Prairies, a place which the Fangs cannot go.

This second book gives us just as much adventure and imagination as the first. The silliness and wit is just as strong in this book, though it delves a little more into the character formation of the Igiby family. (Spoiler alert) Janner learns he is the Throne Warden, first born charged with protecting the heir to the Anniera Kingdom. In Anniera, instead of the first born, the second born is next in line to the throne.The first born is charged with protecting and being the keeper of the High King of Anniera. (End spoiler). A long their journey Janner wrestles with his new found place next to his brother. Tink learns about his new responsibility as well and struggles to take it seriously. He begins to find he falls short in many ways as the pressure begins to take its toll on him.

Andrew Peterson also makes Pete the Sock Man a more prominent character in this book. Also known as Arthum, Pete the Sock Man is seen as a very weird character from the very beginning but they quickly learn he is fiercely loyal, kind, and loves the children very much. He hardly speaks, makes weird sounds and dresses very strange. Back in the Town of Glipwood he would often dance and do peculiar things just as you would expect from your average eccentric street performer (who is not at all average). Along with getting to know Pete the Sock Man better, we meet other fascinating creatures, such as the “Quill Diggle”.  Just the same as the book before you will find descriptions and information about these interesting specimens.

I enjoyed this book just as much as the last one. As it digs deeper into different issues of the characters we’ve grown to know and love, you can’t help but feel as though you are going through it right along with them. That is sure sign of a gifted writer and if you know anything about Andrew Peterson and his music, you will not find it hard to see that in him. This book added in a lot of clever twists and turns- these books even come with its own map so you can follow the Igiby children and see for yourself where they are headed. On the other side of things, I did feel as though the adventure could have ended a little sooner. In some ways it felt like it dragged on a little bit, but on the whole I did not mind spending more time with the Igiby family and their friends. A little forewarning for those that hate cliff hangers, the ending of the book ends with a mad cliff hanger so be sure to grab that third book with this one!

You can buy this book here!